Several months out from the last hike I blogged on this topic (you may want to look back on that one). This year I’m introducing it much earlier in the campaign as training is something which is a high priority in our hike preparation. Everyone is talking about it anyway, so let’s get specific!

Last time around, we introduced the concept of training hard but training smart. Generally I find, particularly at the start of the process, most of us don’t need too much encouragement to do the first part. If you’re part of a competitive, encouraging group like this one, the motivation to train is usually quite prevalent. Therefore, I want to focus on the “train smart” part of the equation.

To quickly recap information given previously, there are five main variables involved in your training. These are;

There is an understandable tendency to focus heavily on the weight being carried. I want to put to you, however, that this is far from the most important variable.

At this early stage of training, frequency is the most important thing. We are targeting twice a week and looking to establish a routine in this regard. In this way, we gradually build a hike fitness base. You can’t do that by having an exhausting training session then taking two weeks to recover until you can train again. Train at your capacity. Don’t bash yourself up if you have a week where the training goes out the window. That will happen to all of us occasionally. Just get back on the horse.

Since frequency is the focus, it is important to think about where you will train. People often make the assumption that it’s all about Mt Lofty. Don’t get me wrong. Mt Lofty is a great training ground. But training exclusively there in the early stages makes it difficult to allow sufficient recovery between sessions to keep your momentum. It’s also extremely crowded, particularly on Saturday mornings. Consider other options.

I regularly use a variety of training venues including Brown Hill, Aldinga Scrub, Willunga Hill and Hallett Cove boardwalk. I do little to no training on Mt Lofty until much later in the campaign. 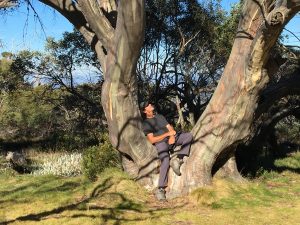 Is Paul training hard or smart?

As you get further in to your training regime, variables such as intensity, distance and especially terrain become more important. For that reason, from December onward, I will be encouraging everyone to climb hills whenever possible. Think about the time you are investing in each training walk and consider how you can maximise the climbing involved. For example, in the second half of the campaign, doing multiples on the steep section of Brownhill may be more beneficial than doing it once with flatter terrain either side.

Throughout all this, there must obviously be a gradual increase in the weight being carried. This is where we must be careful. If a given amount of weight is beneficial for resistance training (such as carrying a pack), then more must be better, right? Not necessarily.

The key word when we are talking about increasing the pack weight is gradual. Training at a given weight for an extended period then making a small increase is much more beneficial (and safer) than loading up quickly and trying to stay at a heavy weight over a long period of time. Here are some suggested targets for the weight of your pack as we go through the training process.

The complication here of course is that many of us have done this before! The temptation for those people is to load up and get to the heavier weights much more quickly. This results in carrying heavy weight for an extended period of time, increasing the risk of burn out, extreme fatigue or injury. Train smart! For those who haven’t trained before, or those who may have struggled with training in the past, it is highly recommended that you stick to the minimum weights along the way. Do not succumb to pressure to keep up with someone else. This is a marathon, not a sprint.

In conclusion, here are some reality checks to consider.