Around this time of year I generally start looking for some extra motivation in regard to preparation for the hike. I found it earlier this week in a most unlikely form whilst training on Brown Hill.

I was on the descent, lost in my own early morning thoughts when I noticed an older man below me, on his way up. Though he carried no pack, he was equipped with trekking poles and boots which suggested he was serious about the climb. His movements were laboured and it was apparent that he was struggling. No shame in that; Brown Hill is hard work. As we neared each other, I surmised that he was not in peak physical condition and might be in need of some encouragement. We stopped to chat briefly as we crossed paths.

Noticing my pack, he asked me what I was training for. I gave a brief summary of our hike intentions, not wanting to discourage him too much from what I assumed to be his initial foray into the world of hiking. Almost as an afterthought, I asked him about his motivation for being on the hill at an hour when most people in the week between Christmas and New Year are still in bed.

“I’m just preparing for the Camino,” he replied casually.

I opened my mouth a few times before the next words came out, such was my shock. For those who may not be aware, the Camino de Santiago is an epic eight hundred kilometre walk through the varied terrain of rural Spain. It has a thousand year history as a religious pilgrimage, and many modern hikers still treat it as such. Completing the Camino is a life-long goal for many of the people from all over the world who take it on each year. To say that it is a massive undertaking is something of an understatement. Clearly, I had underestimated this man.

Eventually I reclaimed my ability to speak and managed to convey my respect for what he was doing; but only until his next statement left me completely gobsmacked.

“I don’t like to brag” he said quietly, “but I’ve already done it three times.”

I’ve been humbled many times through the medium of hiking. I’ve copped several reality checks on our recent Bogong High Plains adventures. I think God often uses his Creation to teach us humility. Sometimes you see it coming. On other occasions, like this one, it just comes out of nowhere and smacks you in the face.

Needless to say, the rest of our brief conversation wasn’t about me. I was completely in awe of my new acquaintance.

I continued the descent and he slowly made his way up the hill. On turning for my next ascent, I realised that the conversation wasn’t over. I had more questions. I made my way back up the hill and was relieved to find him still at the top. 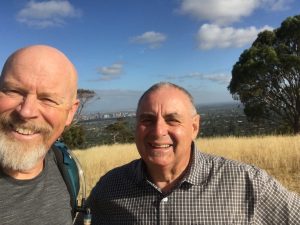 With Eugene on top of Brown Hill

I spent another fascinating twenty minutes or so talking with Eugene on top of Brown Hill. He is sixty-seven years of age. The first time he did the Camino, he completed a staggering fifteen hundred kilometres of mostly solo walking. There are apparently numerous options which can be attached to the main route as well as varied start and finish points. Eugene spoke passionately about how the experience changed his life. He talked about people and places along the way. His deep respect for the history of the pilgrimage was evident. Though he clearly loved to talk about the experience, I was left with the type of feeling that only comes from being in the presence of someone of rare humility. I can’t adequately articulate what a privilege it was to spend this time with him. My training regime certainly didn’t seem as important as it had a couple of hours before.

I learnt something of great value from Eugene. It certainly wasn’t inspired by his physical prowess or supreme fitness. I did not detect anything more than a modest grasp of hiking equipment or technical jargon. What he offered was much more intrinsic. In the end, completing a challenge like the one we are confronting is not about knowledge or experience. It’s not about how much flashy equipment you’ve got. Shock, horror … it’s not even about training. It’s about perseverance. It’s amazing what you can do if you just keep putting one foot in front of the other.

It’s hard to imagine someone less likely than Eugene doing the incredible things he has done. Three Camino’s and counting … he’ll be back there again shortly after our KNP walk. I dare say I’ll be reflecting on that from time to time during our hike.